the internal purity of heart to the external cleanliness of sanitation practice. The experiment arose from Jayeshbhai’s thought of how a deep understanding of toilets, their spirit and their use can be inculcated in the poorest of the poor villages.
The fundamental spirit of this event was that the same essence that goes into the building and inauguration of a temple can also go into the inauguration of a toilet. In Indian temples, after carving an idol from rock, a ceremony called Praan-Pratishtha(installation of life)is performed. Here,a mere rock in the shape of a deity is transformed, through faith, into a representation of the Divine. Once the praan-pratishtha is performed, people who would have kicked the piece of rock will now bow down to it. Similarly, Jayeshbhai suggested a ceremony of prem-pratishthaa (installation of love) for toilets; so that people could understand their spirit and inculcate them as a representation of sanitation into their lives.

The Prem-pratishthaceremony was conducted in both Vanthal and Amiyapur villages, by selecting six of the poorest families, from different communities. All the toilet designs were Ishwarbhai’s designs, that included in them an understanding of who the users of the toilets were, their habits and their practices. Accordingly, six toilet designs were chosen.
Announcements of the shauchalayprempratishthaan (toilets installed with love) ceremony were made beforehand, and each village had a special day allocated for this event. The volunteers from ESI explained to the assembled villagers their understanding of sanitation. They drew analogies to explain that just as T is for temple, similarly T is for toilet. Just as a temple is a place where the heart is purified, the toilet is a place where the body is purified. So, they can both be treated with due respect for attending to a human being soul (mind) and body.
Preparations were made in full swing for the events. ESI volunteers cleaned the streets andfilled potholes in the roads with dirt. Decorative garlands of mango leaves were placed at different places in the village indicating an auspicious event. In front of each new toilet constructed, a colorful rangoli 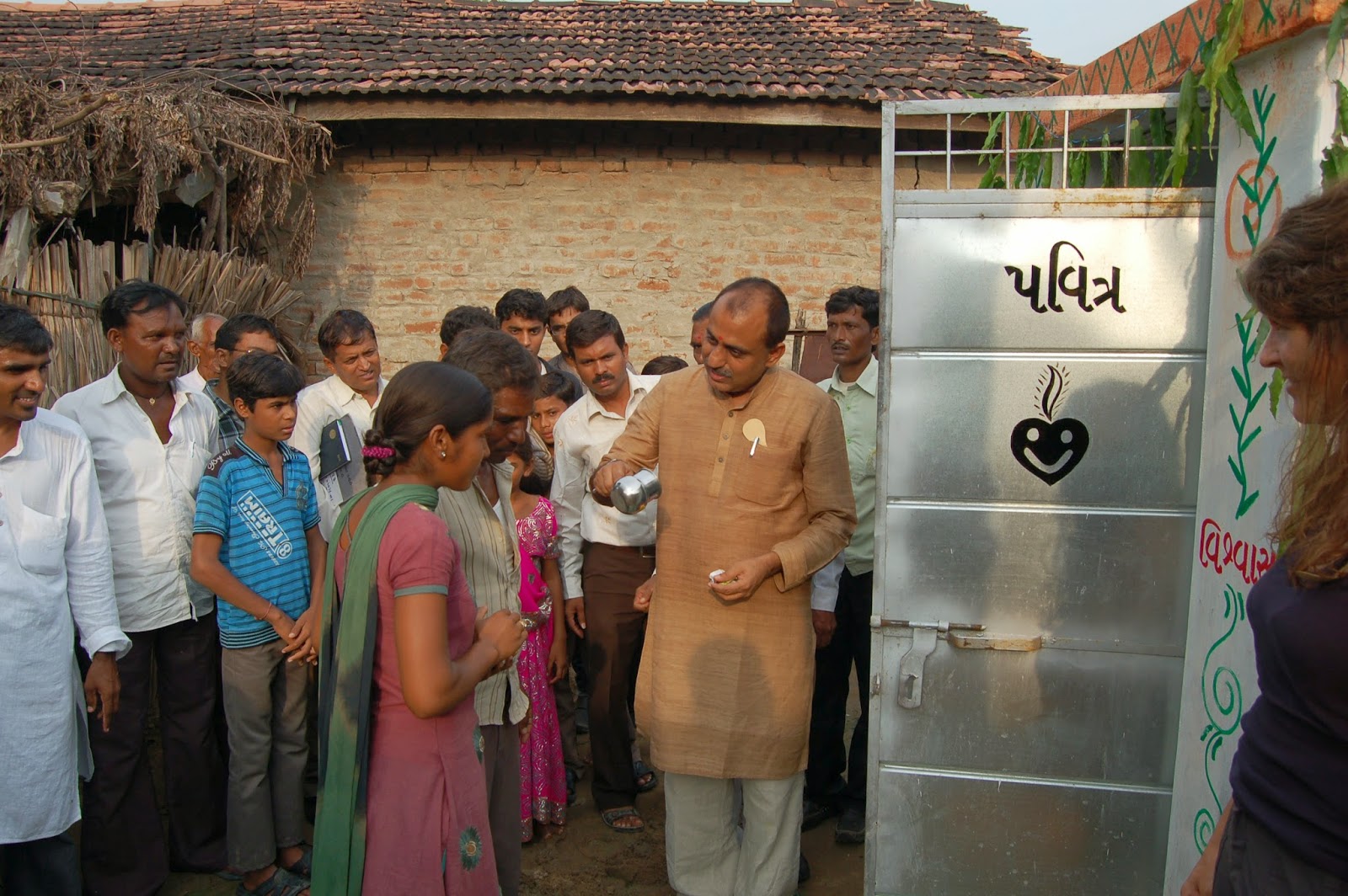 (pavement design) was also created. Volunteers paid special attention to children in schools, explaining to them their understanding of sanitation and why it is necessary. They also explained the significance of the special toilet installation ceremony, thus inculcating in children a natural interest in the regular use of toilets.
The ceremonies were conducted on 22nd July 2013 in Vanthal and 25th Oct 2013 in Amiyapur. For both these ceremonies, a lot of officials were invited. The Ahmedabad district Panchayat head, the block magistrate, Taluk Development officer, the head of the DRDA (District Rural Development Agency), local government officials, Michelle (from the US President’s office for Community Development), Siddharth Sthalekar from Moved By Love, were among those present. The assembled villagers shared with the community their opinions about the use of toilets, the

reasons for their current sanitation conditions, thus giving a voice to the common man in the presence of government representatives. ESI volunteers shared with the community different drawings of toilets, and the specific designs of toilets for different users and communities, and their thoughts on use and maintenance.
For the inauguration event, all the assembled guests and villagers went to each toilet and lighted a lamp at each location. Two-minutes of silence was maintained at each toilet to absorb its significance, a coconut was broken at the entrance to each new toilet and the coconut pieces distributed as offering

to the crowd. (In India, each auspicious activity includes the breaking of a coconut and its offering to God, and the pieces of the coconut are eaten by devotees as a blessing).
The assembled guests and community members then had conversations with each of the six families that volunteered to have a toilet constructed in its home. The family members were active participants in the toilet construction, so each of them shared their experiences of the process. All were unanimous in the idea that they wanted toilets for family sanitation and safety (this was a primary concern for women) and that the construction was a fairly straightforward process.
As part of the event, everyone ate food grown locally and the spirit of “think globally, act locally” was fulfilled.Various sanitation items such as nail cutters,

soaps, doyas (mugs with long handles to draw water from pots), etc. were distributed by Siddharthbhai, Jayeshbhai, Michelle, and others. By interacting with the community, a bond of trust was established. There was also a discussion of how people can start with themselves and their families and make a change in the village’s sanitary conditions. For example, how often nailcutters should be used, how doyas should be used instead of dipping hands into drinking water, etc. was discussed. Each person came away with many different small ways in which they themselves could be the change in transforming their village.
The discussion between the villagers, ESI and government officials continued to span multiple other topics. For example, discussions of why the Harijan and Bharwad communities were very different, with little interaction, was initiated. While people thought that these communities were different and could not mix, others pointed out that unless they unite, they cannot change the state

of the village. Just as both a needle and thread are required to stitch a cloth, similarly both these communities should unite to transform the village. This discussion, being on a sensitive topic, was mediated by Dollyben and Mangleshbhai who support the amrit sanitation project. The mediation by ‘external’ agencies helped to maintain equanimity in discussion and sow seeds of thought in the villagers’ minds.
This event, being one of a kind and indeed, the first of its kind, drew considerable media attention. The ceremony in Vanthal was broadcast on television and viewed all across Gujarat. Invisible ripples from this event still reflect back to Jayeshbhai and Suresh bhai. One very visible and happy outcome of these ceremonies was the sudden increase in demand for

household toilets and toilets in schools. Since these events, atleast 50 new toilets have been applied to by householders to the government (which funds toilet construction for families below the poverty line) in Vanthal and another 25-30 toilets in Amiyapur. Through the ceremonies, both awareness and visibility of toilets have spread, such that now toilet construction has become a demand-based program that begins at the grassroots level instead of through a top-down approach.  Thus the combined efforts of the community, government and NGOs (such as ESI); brought together and supported by invisible, behind-the-scenes forces, has begun to bear fruit.
Posted by Nandini - Service on Wheels at 08:45