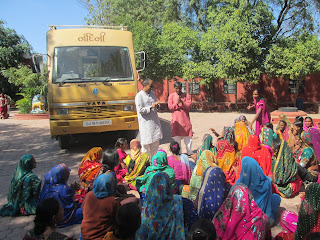 The Sanitation Project is being run in the villages of Pedhamali, Amiyapur and Vantal with the support of Rishibhai from USA.  The principal goal of this project is to change the sanitation habits of the villagers, specifically in the areas of personal hygiene and use of toilets. There is also an emphasis on changing waste disposal habits.

Along with the construction of toilets and the creation of a sanitation complex in each of the schools in the three villages, the Environmental Sanitation Institute (ESI) is focusing on the development of a primary school curriculum to teach children about the importance of personal hygiene.  A “Safai Sadhak” living in each village has been hired to facilitate this integrated and holistic process.   Every week, one school day is devoted to engaging students in a dialogue about how everyone can participate in creating the best school, the best homes and the best village possible.  The school sessions use various approaches to engaging the students, including “Ideal Home,” “Ideal School” and “Ideal Village” competitions as well as action-based learning. 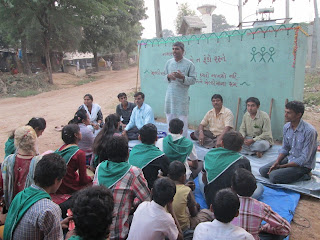 Part of Suresh Bhai’s service work with ESI is to help seed values, practice and habits of sanitation; and let the action spring forth as a result of the values. As part of this, he has set up an experimental program in three of Gujarat’s villages – Amiyapur, Pedhamali and Vanthal. His goal is to develop these villages into ‘model villages’ through extensive interaction at multiple levels, and change the hearts and minds of the people first, in order to make the practice self-sustaining. In turn, these villages would be examples for other villages, and word about sustainable sanitation can spread by word-of-mouth from village to village. He believes that the word about this will spread organically to multiple locations, and the neighboring villages will gain their own inspiration by watching the ‘model’ villages.

Compared to typical NGO programs that involve ‘government programs with people’s participation’, the idea is to change the hearts and minds of people by creating ‘people’s programs with government participation’ – that is, the initiative would be owned and operated by the people, with financing from the government. Thus, Suresh bhai’s ‘program’ involves getting to knowing the villagers, and building minds and mutual understanding, and to take responsibility for improving their village; rather than building the facilities for them. By reaching out to their hearts and connecting deeply, and demonstrating goodwill through small acts of kindness and service, Suresh bhai finds it easier to change habits. His demonstrations of sanitary facilities through his Nandini van. Usually convince people of the benefits of improved sanitation practices. Once the seed and motivation is sown, it becomes easier for people to begin to take responsibility for improving their families, homes and villages. This has inspired the villagers in Amiyapur, Pedhamali and Vanthal to create their own model villages. The villagers petition the government for financial help while demonstrating their own motivation and independence, creating an ideal system where the drive is from within, thus improving possibilities of sustainability. 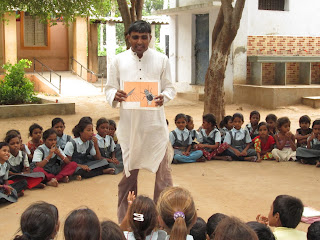 Suresh bhai’s first step involves visiting villages and setting up personal connections, and becoming aaprt of the village. After convincing the villagers about his mission being beneficial, and with the villagers as the primary drivers, as described in Article 1, he obtains agreement from all of them to set up a systematic program for the village’s sanitation and beautification.
Following that, an initial survey of the basic practice in the village is performed.  Baseline Survey: A KAP survey that obtains information about Knowledge, Attitude and Practice. This is through speaking with individual householders, panchayat leaders, school teachers, anganwadi workers, all at the personal level to understand the current state of sanitation in the village.
Two key types of practice have been established to complement Suresh bhai’s visits and to keep a continuous, ongoing practice of sanitation in each village. The first is the establishment of safaisainiks who are local representatives within the village, and the second the visits of various volunteer groups who perform hands-on service in the villages.