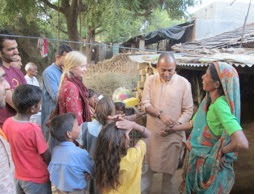 The Sanitation Project is being run in the villages of Pedhamali, Amiyapur and Vantal with the support of Rishibhai.  The principal goal of this project is to change the sanitation habits of the villagers, specifically in the areas of personal hygiene and use of toilets. There is also an emphasis on changing waste disposal habits.

Along with the construction of toilets and the creation of a sanitation complex in each of the schools in the three villages, the Environmental Sanitation Institute (ESI) is focusing on the development of a primary school curriculum to teach children about the importance of personal hygiene.  A “Safai Sadhak” living in each village has been hired to facilitate this integrated and holistic process.   Every week, one school day is devoted to engaging students in a dialogue about how everyone can participate in creating the best school, the best homes and the best village possible.  The school sessions use various approaches to engaging the students, including “Ideal Home,” “Ideal School” and “Ideal Village” competitions as well as action-based learning.

Starting the last week in October, the Safai Sadhaks conducted “Knowledge, Attitude, and Practice” surveys in each village.  The information gathered in these surveys is used to better understand the needs of the community and developing future projects. 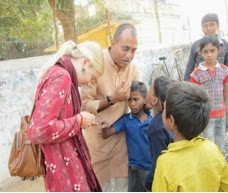 Every year, student members of the National Service Scheme of the famous Ahmedabad LD Arts College work in villages throughout Gujarat with the support of ESI. This year, ESI recommended that the student camp be held in Pethamali to strengthen the ASP’s work.  For one week, from November 3rd to November 9th, 50 students from the NSS visited Pedhamali village to serve the community and learn from them. Through their dedicated yet humble investment of head, heart and hands; they formed deep connections with many of the villagers. The students experienced not only the warm hospitality of the community, but could be inspired by the spirit and generosity of the villagers.

For seven days, we all worked together on the following activities.

Arrival and Welcome: The villagers gave the students a traditional welcome.  The students set up their accommodations in the local primary school and interacted with the teachers, children and youth of the community.

Opening Ceremony: In the village’s main temple, Jayeshbhai of ESI gave an engaging presentation to the students and villagers about the purpose of NSS and about healthy life habits.  Jayeshbhai’s spirit and ability to connect deeply with people of all walks of life set an inspiring tone to the start of the activities. 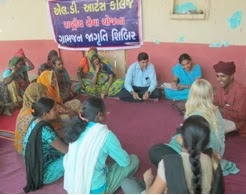 Morning Chanting: Every morning at 5:30, the students walked around the villages singing bhajans and dhuns, and saying slogans about sanitation, health and de-addiction. After that, they sit in prayer and discuss what they will do.

Cleaning: In small groups, the students swept the streets of the village section by section. These created opportunities for students to interact the week, every street had been cleaned. The students become a living embodiment of the ASP’s sanitation message, and channels through which the message can be conveyed to the villagers.

Outer and inner cleanliness effort: At the centre of Pethamali was a public urinal which had become a dumping ground for waste of all kinds and so was not being used.  Because of its central location, symbolic and practical value, it was an ideal place to concertize the values of cleanliness and community service and offer a useful gift to the village.  Students, ESI members, village youth and adults worked together to 4 containers of waste from the area, clean the urinal properly and build a soak pit for safe urine disposal.  Once it was clean, it was painted with bright colors and decorated with messages about cleanliness and welcoming words.  When completed, an inauguration was held, complete with bhajan singing, prayers and ribbon cutting ceremony. This was a unique experience for all, to bring to life the idea of a urinal being as clean and beautiful as a temple. 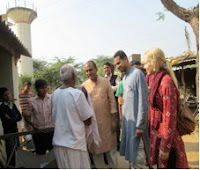 Because the labor was infused with love and dedication, it had profound impacts on both the NSS students and the villagers.  Though at first the students were reluctant to enter the urinal, over the course of the cleaning they saw the impact of their service on the site, and became increasingly motivated to contribute to its beautification.  They experienced the transformational potential of service work. The sustainability of the effort was also clear as the villagers had taken on the responsibilities to maintain the cleanliness of the site in the days following the inauguration. The urinal was free of garbage and children played outside of it safely.  Furthermore, despite the fact that there is no water source inside, villagers made the effort to visit a nearby home to take water from there and clean the urinal inside after use.

Dustbin behavior change program: Over 150 empty oil tins were collected from outside the village.  Sitting in the centre of the town, ESI members and NSS students cleaned the bins, painted them and turned the otherwise waste material into dust bins decorated with the words “Give me garbage”.  Some of the bins were placed in the public places, such as the school and the temples, and also one was given to each shopkeeper. We also took advantage of moments when many villagers were together to present the dustbins to individual women, explaining to them about the work that was done to create the bins, how to use them and why.  In front of their neighbors and community members, the women vowed they would use the bins and also motivate their neighbors to do the same.

Home stay: For most of their stay in the village, the students lived together in the local primary school, participating in food preparation, serving and cleaning.  However, on the fourth day each student was hosted by a family, working with them, taking meals together and sharing the messages about the importance of sanitation.  Upon arrival, each of the students brought a dustbin as a gift for their host family.  This experience was pivotal for creating deep heart-to-heart connections between the students and the villagers.

Animal Husbandry and Cattle Camp: Animal husbandry is one of the two principal occupations in Pedhamali.  18 months ago, the women of the village created the Women’s Milk Cooperative Society to get a fairer price on the market for the milk they produce. In Mehesana district, it is the only all woman-run milk cooperative. To support the Cooperative and its members, we organized a “cattle camp” with 5 veterinary doctors from the area, who treated over 80 cows and buffalos.  Additionally, a local dairy expert was invited to speak to the women of the milk cooperative about milk handling and the income generation possibilities of secondary milk product productions.  The 60 women in attendance were enriched and inspired by the opportunity to learn from this woman leader from another community.

Cattle Trough Masonry: For many years, stagnant water has accumulated regularly in front of a local cattle water trough because it is used for laundry, leading to increased mosquito breeding and potential malarial risks.  As the community had designated this as a priority, we bought 3 tractors of sand to infill the area in front of the trough. From midnight to three o’clock in the morning, with the help of several villagers, we built a small channel to ensure the water would run off quickly instead of stagnating.

Soak pit for disposal of waste water: Upon arrival in Pedhamali, we noticed that waste water from people’s homes was running onto the roads.  Thanks to ESI expertise in the area of rural sustainable technology, we built 8 soak pits in individual homes using low cost and waste materials: broken bricks, cracked earthenware pots and coconut fibers.

Village Rallies: To bring to life the messages about de-addiction, we paraded through the streets of the village with a giant 10-headed Ravana puppet, with each head representing a different vice, chanting slogans about de-addiction.  Similarly, after workshops were offered separately to the men and women of the village about HIV/AIDS, we led a rally to share the messages of prevention and the importance of getting tested before marriage with the whole village.

Values-based Theatre Performance: The students performed a series of skits that they had written themselves, each one focused on a different problem faced by the community, based on what they had observed during the day. Many villagers were touched by the engaging and humorous performances, never having seen that type of drama before.  Sureshbhai, “Suchita Sadak” also gave an engaging talk about the mission of the ASP and the work that Jaldeepbhai (Pethamali’s Safai Sadak) and Snehelbehen have undertaken over the last 5 years and their devotion to the village.

Water budgeting: In Pedhamali, nearly half of the homes do not have a way to turn off their water taps, leading to large volumes of water waste and making it difficult for water to reach homes at higher elevations. Two local experts from the District Rural Development Agency (DRDA) were invited to share some of the best practices and innovations in water saving technologies that are being experimented in the district. They explained an upcoming pilot project for Pedhamali  that would see every home equipped with a proper tap.

Spiritual songs: A famous local bhajan singer was invited to perform in the village, singing songs that made connections between inner purity and external virtues such as cleanliness and de-addiction.  Several other performers dressed in traditional garb and performed short skits to make the presentation more engaging.

Community Marriage: We visited every home to personally invite the villagers to the “wedding” of Jaldeepbhai and Snehelbehen.  The couple had married three years ago, but very few of the villagers had attended the wedding, so everyone was excited to participate in the wedding. Dressed in traditional village wedding clothing, Jaldeepbhai and Snehelbehen came to the temple in a car and accompanied by all of the excitement, firecrackers and dancing as is custom.  During the wedding ceremony itself, we integrated discussions about the issues of dowry, child marriage and child labour.  Various men took the role of “Goddess”, dressed as women, and walked around the crowds supposedly collecting money for Snehelbehen’s dowry.  In fact, the money will be used towards projects in the village.  Over 7000 rupees were collected, showing the villagers how much collective wealth they have and how much they can contribute towards the good of everyone.

Closing ceremony: The chief guest at the closing ceremony was a devotee of Swami Sacchidanand, a famous saint in Gujarat.  He gave a presentation integrating scientific knowledge with spirituality and discussion of values, giving many examples relevant to the realities of the villagers.